This tutorial assumes you are already familiar with both RxJS and React.

For this tutorial we will be borrowing the Github issues example that is taught in the Advanced Tutorial of the Redux Toolkit.

It's a great example because it starts with a plain React application and it then shows how to migrate that application to Redux using the Redux Toolkit (RTK). One of the many good things about the tutorial, is that it illustrates the mental models required to manage state efficiently with RTK. In this tutorial we will try to follow the same approach.

The example application for this tutorial is a Github Issues viewer app. It allows the user to enter the names of a Github org and repository, fetch the current list of open issues, page through the issues list, and view the contents and comments of a specific issue.

The starting commit for this application is a plain React implementation that uses function components with hooks for state and side effects like data fetching. The code is already written in TypeScript, and the styling is done via CSS Modules.

It's worth noting that there are a couple of tiny bugs (or annoyances) with this React implementation:

We will be addressing these issues as we migrate the initial code to React-RxJS.

The codebase is already laid out in a "feature folder" structure, The main pieces are:

For this tutorial we will need the following dependencies:

Also, we are not going to need Axios, because we will be using rxjs/ajax instead.

The original API uses Axios, which is a great tool for handling requests. We could keep the API as it is, because RxJS can easily treat Promises as Observables. However, since we are going to be using RxJS, it makes sense to use RxJS instead of Axios. It's a pretty straightforward change:

Identifying the state of the App#

Now that we have everything ready, let's think for a moment about the state of this app. Luckily for us, there is not a lot of it. So, let's represent the different state entities and their relations on a diagram: 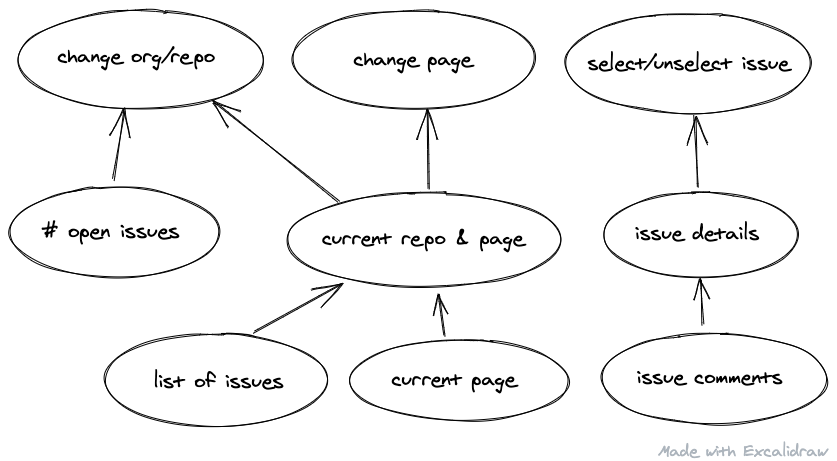 At the very top we have the different events that can happen. The 3 different user interactions:

These are the events that will propagate changes to our state entities.

Then we have the following state entities:

That's it. That's all the app-level state. It's worth pointing out that the UI doesn't allow the user to change the repo or the page while there is a selected issue.

Defining the state of the App#

Now that we have identified the state, let's represent it using RxJS streams, and let's create the necessary React hooks.

One nice thing about Reactive Programming is that it's possible to declare state in a way that reads from top to bottom. That's because each state entity is only coupled to the entities that it depends on.

In order to illustrate that, we will be putting all the state of this app in the same file. Normally, it would be better to break this file down into smaller pieces and to co-locate each piece closer to where it is being used.

Let's first define and export the default states of the app:

Next, let's create the entry points for the user interactions:

Now that we already have the top-level streams, let's create a stream that represents the "current repo and page" entity. We want to reset the page to 1 when the selected repo changes, so we can represent this behavior with merge:

From this stream we can extract the current page:

In this example we also want to use React Suspense: When the user changes the repo or page, we want to show a suspended state while the new issue list is loading (i.e. "Loading issues..."). The way we can do this, is by emitting the SUSPENSE symbol, that means that there's data being loaded in this stream. This can be expressed reactively as:

This way, every time the current repo or page changes, the useIssues hook will send another query to the API to keep everything up to date, suspending the component(s) that depend on it while it's fetching the new values.

We can use the same pattern to retrieve the number of open issues:

Now, since issues$ and openIssuesLen$ are observables that trigger side-effects, it's important that their initial subscriptions happen before react renders the components that depend on them. That's why we are going to define a top-level subscription that ensures that.

We need to also make sure that an error won't close this top-level subscription:

As this pattern of switchMap and startWith(SUSPENSE) is something that's often used, react-rxjs exports switchMapSuspended in @react-rxjs/utils that makes it sightly less verbose.

Now that we have all the application state declared, we can wire it up with the components.

The diff of this component is so brutal that it's best to show how the code looks with react-rxjs:

With Suspense, we don't need to manage the loading states by ourselves - React will. This, coupled with the fact that the state can be lifted out, allows us to simplify the original app to a couple of simple components.

For the "search repository" form, by having the state in a separate file, we can just import those bits that we need directly, and this way the parent doesn't need to get coupled to values that it doesn't need:

The page for the list of issues is also greatly simplified, because all the state management on this part is already done, and it turns out that this component is not the consumer of any of the state it managed - The consumers are their children, which will access whatever they need themselves.

This component still has a responsibility though: to catch any error that would happen on fetch, and show a fallback UI. React-RxJS lets us use ErrorBoundaries, not only for the regular errors that happen within React's Components, but also for those errors that are generated in a stream.

What will happen is that, if a component uses a stream that emits an error, it will propagate that error to the nearest error boundary. If that happens, the Error Boundary will show the fallback UI, and we can decide how to recover. In our case, we want to show the components when the user selects another repository or another page, so we can set this up easily by using a useEffect:

For the header, we can get rid of its props (as we have already declared its state), and we will also take the chance to represent the loading state by using React's Suspense:

The same logic applies for the pagination component:

When react renders IssuesListLoaded, it will call useIssues(), which internally will subscribe to the stream, and start fetching the value from GitHub's API. As that value won't be resolved immediately, the component will be put in suspense until we get a response back from the server.

At that point, the component will exit suspense and issues will have the value expected.

Then, when the user changes to another repo or page, useIssues() will put the component in suspense again until the new request has loaded.

Here, by also using error boundaries and suspense, we can break down this component into smaller ones. There are too many changes to be able to follow this, but the result would be:

And lastly for the comments of the selected issue, we can also just grab the hook from where we declared the state and use it. Because of Suspense, we again don't need to handle the loading case.

The result of this tutorial can be seen in this CodeSandbox:

With this, we've managed to:

As another advantage, it's worth noting that in this example we've decided to keep all the state defined in a single file: The example is small enough, and it's easier to explain this way. However, in a real application you can split and co-locate the state in each of the relevant parts of your application, and it will play nicely with code-splitting, if you were to use lazy imports. Let's quickly try this to see how it plays a big role in load time.

For this example, one part of the application that can be split from the main app is the page for issue details: It won't be needed until the user clicks on one of the issues, so it's a perfect starting point.

With React-RxJS we can just move the streams that are only used by that page into a separate file. Let's put it next to where it will be used, the IssuesDetailsPage and IssuesComments components:

Then we only need to update the imports for those components to use the above file instead:

And use a lazy import with Suspense in App:

Now let's compare the speed between the original version without code splitting and the one that we have optimised with React-RxJS. Looking at the Chrome Network tab with 3G for react-state:

We see that the chunk that prevents the application from starting until it's completely loaded weighs 76.8kB compressed (240kB uncompressed), and it took 3.71s to load. And if we take a look at the same tab for React-RxJS with code splitting:

We can see that it weighs less, and so it also takes less time to load: About 20kB (40kB uncompressed) less and 12% faster. Although we didn't move 40kB of minified code into a separate chunk, we reached this value because webpack performs tree-shaking. This means that things like the 2 API calls that are only done from the IssuesDetailsPage component, or the RxJS operators that are only being used for the IssuesDetailsPage, were also excluded from the main chunk.